Primary Assemblies for the Global Dimension 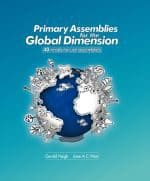 Primary Assemblies for the Global Dimension is a brand new publication of 40 assemblies that draw out the emotional, moral and spiritual aspects of the stories they tell. In order to do this, the stories are about people – the student on a gap year, the farmer trying to sell his bananas, the international artist whose stage is the whole world.We consider their problems, their feelings, the ups-and-downs of their lives. The assemblies are not linked to any one religion, although spirituality is always evident and any teacher wanting to make a religious link can easily do so using either the short prayer included or by their own understanding of religious teachings and texts.

'We live in one world. What we do affects others, and what others do affects us, as never before. To recognise that we are all members of a world community and that we all have responsibilities to each other is not romantic rhetoric, but modern economic and social reality.'
Putting the world into world-class education, DCSF

'Global Dimension' is not a curriculum subject but, as the name implies, an added dimension to all that happens in a school under the general heading of 'Curriculum'. The National Curriculum continues to emphasise this perspective:

'The school curriculum should contribute to the development of pupils’ sense of identity through knowledge and understanding of the spiritual, moral, social and cultural heritages of Britain’s diverse society of loyal, national, European, Commonwealth and global dimensions of their lives.'

Assemblies are the perfect opportunity to reinforce this ethos, so, here at Optimus Education we decided it was time to design a resource to support you in achieving this aim, and are proud to introduce you to Primary Assemblies for the Global Dimension.

Why are assemblies so important in your school?

'A high quality school assembly is one of the most important aspects of a school’s curriculum. Its potential to nurture a positive school ethos that stresses care for the self, others and the pursuit of all forms of excellence should not be underestimated. It powerfully nurtures the development of intrapersonal intelligence … and can make a positive contribution to pupil self-development and therefore be at the heart of raising achievement and standards.'
From 'Being a School of Excellence. The Role of the School Assembly' by Neil Hawkes, 2000, Living Values Education.

Begin your school day in a positive, enriching and motivating way with these ready-to-use assemblies.

The 40 assemblies cover all of the definitions for ‘global’ as suggested by the global education charity DEA:

Each assembly tells its story in an accessible way, usually through the experience of a person or group of people. Links to SEAL and the five outcomes of empathy, motivation, self-awareness, managing feelings and social skills are also provided.

Please read on for an overview of just some of the exciting assemblies included in this brand new resource:

Voices on the bus
Sitting on a London bus and hearing different languages.

About 300 languages are spoken in London, which means it’s the most linguistically diverse city in the world. The aim of the assembly is to help children enjoy and celebrate the diversity of languages and cultures in today’s British cities. They are a sign of the way we are all increasingly world citizens.

Pasties in Peru
The pasty is a symbol of Cornwall but its appeal has spread far and wide with the Cornish diaspora that began in the early nineteenth century.Clare and Wes are surprised to find out that Cornish pasties are eaten all over the world.

The Industrial Revolution of the nineteenth century changed Britain – and many other parts of the world – irrevocably. Workers from all over Britain exported their knowledge and skills.

This story focuses on the humble Cornish pasty – a much-loved and familiar symbol of Cornwall – which travelled all over the world, carried by miners who took their culture with them.

Pen pals from Bolivia
AJ’s mum is from Bolivia. She helps the children of Great Street Primary become pen pals with children from a school in Bolivia.

The children learn that there are lots of things they have in common even if they don’t speak the same language.

This assembly encourages children to think about the benefits of becoming pen pals with children in another school. Children are encouraged to think about ways of communicating when there is no common language.

Polar Bears and Inuits
Interdependence means that people share common principles and mutual responsibility. No event, however distant, is ever truly remote from us.

Farming in Britain
Farming in Britain has changed beyond recognition in the years since the Second World War. The changes are because of a number of reasons: technological, environmental and societal.

This assembly tells the story of two farmers who are facing into the winds of change.

The challenges facing British farmers are many and diverse. All farms, especially smaller ones, have suffered with the Foot and Mouth disease (2001, 2007), milk prices and quotas, EU regulations, imported food and a changing environment. Their challenge is to change and to diversify.

The assembly follows the decision of two farming families to embrace change: one starts a goats cheese farm, combined with tourism and forestry, and the other decides to grow biofuel. For both families, their way of life is changing for good.

Global commodities - oil
Oil – or at least the trade in oil – has the potential for great international tension and conflict. It’s arguably the most important global traded commodity – and it’s available in finite quantity.

The assembly explains to children some of the tensions and disputes caused by the way that the Earth’s precious resources are distributed. It does this by envisaging a dispute about the ownership of a fortuitously discovered barrel of sweets.

The United Nations - the vision of world unity
The seemingly never-ending search for agreement on the need to abandon violent solutions to the world’s problems.

Why is it that although everyone wants peace, it proves impossible to get nations to agree not to fight? The story of the United Nations is one of high aspirations and ideals constantly being undermined by self-interest. The assembly explains some of these issues for children.

Staying in touch – family brought together by the web
More and more families live international lives – grandparents on one continent, sons, daughter and grandchildren scattered across the globe. Keeping in touch used to mean the excitement of letters.

The figures are stark. Thirty seven million people around the world are blind. Twenty-eight million don’t need to be. The simple reason is poverty, which leads to poor hygiene, and also, of course, to a shortage of medication and, perhaps most importantly, a shortage of trained medical professionals. As a result, people become blind from conditions which could be dealt with quickly and easily, given adequate resources. A number of charities are set up specifically to deal with eye conditions. The assembly deals with just one, but provides links to others.

Learning new languages – and the mistakes we make
It’s routine in many – perhaps most—schools to have children joining you with limited English language skills. The attitude of other children is crucial to their progress, because learners in any language, children or adults, need the confidence to have a go. It’s important that children see mistakes as steps along the learning road rather than stumbling blocks or signs of failure.

Too much water – flooding in the UK
Two-thirds of our planet is covered in water but only a small amount is fresh water. Water, therefore, is a critical ingredient to life on Earth: but some places don’t have enough, and some places have too much.

This assembly looks at what happens when we have too much rain and tells the story of a group of children who come up with some imaginative ideas to prevent homes being flooded – and find out that some of their wackier ideas are already being trialled around the world.

Sanitation
The greatest medical advance of the past century and a half has come from improved sanitation. It’s saved many more lives worldwide than all the progress with drugs and surgery put together. The assembly draws attention to the work of the Sulabh Foundation, which spreads the word about effective sanitation and works to improve the lives of the people who work as scavengers. It also features the “toilet house”.

Marine debris – Seal Island and the Great Pacific Garbage Patch
Anyone who lives by the sea is used to seeing litter washed up on the beach, but tides and currents combine to drag tonnes of rubbish every year to countries that have nothing to do with producing the litter. And it’s a big problem. This assembly tells the story of Sully the seal and the unfolding tragedy that marine debris causes his friends.

Allotments – growing your own
All over the world, people grow their own food. In this country it’s often done on allotments. The assembly tells the story of an allotment, makes a point about food miles, and tells us that that growing food for the home is a worldwide activity.

The carbon footprint
Individuals are all increasingly aware of how they can reduce their carbon footprint: recycling, re-using, using less, being more environmentally aware, reducing air miles (for food, purchases, travel) and so on.

This assembly focuses on what big businesses can do and are doing to reduce their carbon footprints.

The wildlife cameraman
Travelling around the world for work can be great fun but hard work, too. This assembly introduces children to the pains and pleasures of a very different kind of job. It follows the adventures of Kevin Flay, a well-known and well-respected wildlife cameraman, and the effort it takes to get just a few seconds of film.

Advertising in Hong Kong
This assembly looks at what it’s like to live and work in another country, and how cultural differences can affect how you do your job. It looks at the highs and lows of living in a foreign culture.

Elgin Marbles
This assembly focuses on the debate surrounding the ownership of the Elgin Marbles as well as explaining their origin and importance.

Not enough water – drought in Australia
Australia is the driest populated continent in the world: droughts are expected every 11 to 14 years, but the last few years have been particularly bad. The government has initiated a number of programmes to conserve and create water. The story of the assembly takes place at a (fictitious) council meeting in the town of Toowoomba. There, citizens discuss a number of possible solutions.

Sharing a land boundary
Border disputes are an age-old and continuing source of disputes and wars between nations. The assembly illustrates this for children with a story about a disputed garden boundary. It then describes the long-running border conflict between Peru and Ecuador.

It is important to reinforce the global dimension ethos wherever and whenever possible. One effective way to do this is during school assemblies. Sign-up for your risk-free copy of this exciting new publication today and see the benefits for yourself.

TO GET THE LATEST PRODUCT INFORMATION PLEASE VISIT OPTIMUS EDUCATION